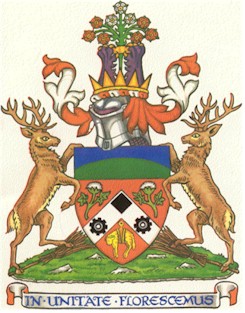 The basic colours are red and white, the colours of the Roses of Lancaster and York and of the arms assigned to Roger of Poitou, who held all of what is now Lancashire under William I and William II.

On the red background are the symbols of the main textile industries around which the urban areas grew - sprigs of cotton (seen in the arms of Nelson and Burnley Rural District Council and the insignia of Colne and Trawden), and a golden fleece for wool (Nelson,Colne; a ram's head was in the insignia of Trawden and a sheep in the seal of Skipton Rural District Council).

Between them is a 'chevron' (Nelson, Brierfield) bearing on white a 'black diamond' for the ancient and modern coalmining activities in 'Great and Little Marsden' (Nelson) and Trawden Forest, where tenants were allowed to dig coal in the 14th, 15th and 16th centuries, and in Brierfield, where pits were sunk in the 19th century.

Flanking the black lozenge are two black cogwheels for the more modern engineering industries of all kinds which are now supplanting or supplementing the traditional industries in parts of the Borough.

The industrial symbols are all gathered under a'chief' (top layer) showing an heraldically stylized Pendle, green against a blue sky, so that the whole shield is a kind of industrial and topographical map of the Borough of Pendle.

Above the shield is the closed helmet proper to civic arms, with its twisted crest-wreath and decorative mantling or tournament cloak in the red and white of the shield.

On the wreath stands the Crest. At the base is a gold Roman 'corona radiata' or rayed crown, frequently seen on the heads of Emperors on Roman Coins, alluding to the Roman settlements at Colne (Colunio) and elsewhere, in and near Nelson.

From this rise two purple lion's forepaws, those of the purple lion of the De Lacys, Lords of the Honour of Clitheroe and Manor of Colne, who governed practically all the present Borough area in the medieval period. (The lion was a feature of the arms of Burnley Rural District Council and the insignia of Colne). The paws hold a gold circlet through which is thrust a spray of nine roses in three sprays of three joined on one stem.

The two sprays at the sides are of red roses for the six Lancashire districts of Nelson, Colne, Brierfield, Barrowford, Trawden and Burnley Rural District Council.  Between them are three white roses for the Yorkshire districts of Barnoldswick, Earby and Skipton Rural District Council. The roses symbolize the union of the nine Lancashire and Yorkshire areas to form the new Borough of Pendle. So the crest takes us from Roman Colunio to the present day Pendle.

The Supporters flanking the shield indicate the Forests of Pendle and Trawden on the western and eastern sides of the Borough. They were established as moorland game-hunting areas in the 11th and 12th centuries when the De Lacys ruled the area.  The supporters are stags standing on a base of moorland with millstone outcrops, and to distinguish them from other stag supporters, they have under foot the broomstick or besom, associated with the traditions and legends of the Forest and still sold in Pendle as souvenirs.

Centuries ago, the forestfolk used to go round 'beating' the farm buildings with poles or besoms in an ancient fertility rite in the numerous cattle farms or 'vaccaries'. This use of the broomstick accounts for its association with witchcraft, and they here symbolize the Witches of Pendle.

Witches were also associated with Trawden Forest, and W. R. Mitchell ('Lancashire Witch Country') and R. Catlow ('Pendle Witches') give accounts of their activities and the Pendle foresters' fear of witches, which persisted until comparatively recent times.

The Motto, suggested by a Member of the Council, succinctly expresses in Latin (In Unitate Florescemus) the theme of steady prosperous growth which the spirit of unity hopes to achieve. It may be translated as 'In unity we shall flourish increasingly', or 'In unity we shall grow in prosperity'. The motto is linked with the symbolism of the united roses in the crest.